Possibly one of the most useful aspects of the CMS software is the ability to assign weights to any scorecard node, at any level of the scorecard tree. For any node in this tree, any number of subordinate nodes can play a role in determining the score of their parent. This allows users to emphasize the importance of certain higher priority items over others. When you have two very important objectives, such as "Produce many widgets" and "Keep cost low", chances are that the default weight of "1" (setting each of their weights equally, so 50% for each) would work just fine.

But what happens when you add a new node of lesser importance to the tree?

Of course it's important to keep the water cooler filled, but the default weight of "1" means that it is of equal importance to "Produce many widgets" and "Keep cost low"(so 33.3% each). So now we need to alter weights of the nodes so that they are scored more appropriately.

The question now may become "How do I modify the weights of these nodes so that 'Keep water cooler filled' is only worth 15% of the overall score for this level of the tree?" One way of accomplishing this would have been to first do some calculations in your head to determine the desired weight for each node. Second you would right click on the first node, change its weight and click save, then do the same actions for all subsequent nodes that you need to change.

Not too difficult when only working with 3 nodes, but what if you have, say, 17 nodes, that's a lot of calculations, and node editing to do!

Our solution is to allow users to modify all nodes at any level of the tree, simultaneously. 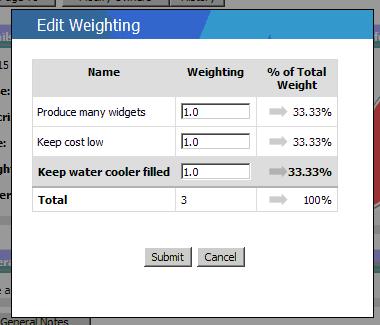 One of my favorite features about this screen is the immediate "percentage calculations" that take place while editing weights. For example, if you clicked inside the "Keep water cooler filled" textbox and changed it from "1.0" to "2", you've just increased the weighting of that node to be double that of the other two nodes. At the moment you press the "2" key, CMS recalculates the "% of Total Weight" and instantly displays "25%" for the first two nodes, and 50% for "Keep water cooler filled", clearly not a good weight distribution considering that the water cooler isn't anywhere near the importance of the other nodes, but thanks to the new Edit Weighting interface this was an easy error to catch!

As I mentioned earlier, it doesn't seem like that big of a deal, manually doing calculations and editing weights for only 3 nodes, until you have to do it for a lot of nodes. Then the calculating and editing can become quite tedious.

The introduction of this feature in version 1.6 of CMS is one that we hope will provide users with an even greater appreciation for both the usability of our application, and the focus that we place on providing our customers with cutting-edge solutions to even the most mundane of problems.

We’re a "Great Place to Work" 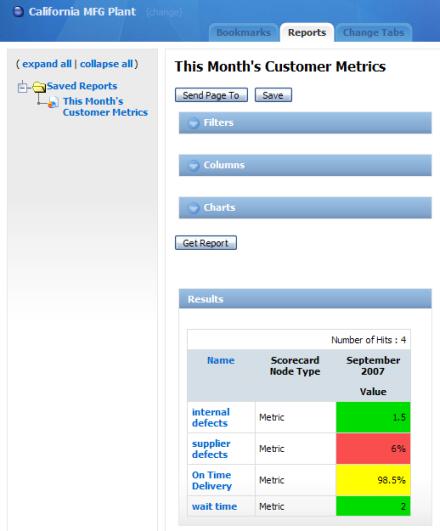